Sentences her to 20 months in Prison and orders her to retract all of her statements.

By way of the above considerations, imposing justice on behalf of the Nation, the Judge of the Seventh Criminal Court of the Superior Court of Justice of Lima.

1. DECLARING: UNFOUNDED the blemish presented by the Defendant by means of a letter of 360 against the judgment issued regarding the custody of Adrianna Kent and the archiving of the wrongful touching case issued by the justice of the United States.

2. DECLARING: UNFOUNDED the exceptio veritatis raised by the defense of the complaint by means of letter 764.

3. DECLARING: UNFOUNDED, the exception of the nature of action.

4. DECLARING to ROSE MARY ANN CHACON CASTANEDA author of commission of the crime against Honor – Aggravated defamation to the detriment of Dustin William Kent.

5. TO HER IS IMPOSED A YEAR WITH EIGHT MONTHS OF PRIVATIVE PENALTY FROM FREEDOM, the same is suspended in its execution for the term of ONE YEAR, under the fulfillment of the following rules of conduct:

A) the prohibition of leaving from the place of residence without previous Judicial authorization,

B) To appear every 30 days at the location of this venue, in order to give an accounting of their activities and sign in the Register of Biometric Control.

C) Do not return to commit a criminal offense

D) Repair the damage caused to the complainant through the payment of the Civil Repair within 6 months of the present issued sentence.

E) The sentenced should rectify the facts that are material to the present process by categorically influencing through showing the falseness of the aggravating information that affected the honor of the complainant, disseminating them by the same means of communication and number of days that she propelled the offensive information.

All these rules of conduct must be complied with by the convicted Chacon Castaneda, under the warning that in case of non-compliance, proceed according to what is established in Article 59 of the Penal Code.

6. IT IS IMPOSED 190 DAYS-FINE at the rate of 10 soles for each day fine, which makes a total of one thousand nine hundred soles (I, 900) that must be deposited in favor of the Public Treasury within ten days of being issued the present sentence, according to article 44 of the Penal Code.

7. IT IS SET in the sum of THREE HUNDRED THOUSAND SOLES (300,000) for civil reparation that must pay THE SENTENCED CHACON CASTANEDA in favor of the aggrieved Dustin William Kent.

8. MANDATE that consented or executed the sentence in the inscription of the conviction Chacón Castaneda in the respective registers. It should be read in Public Act. Take reason and make to known. 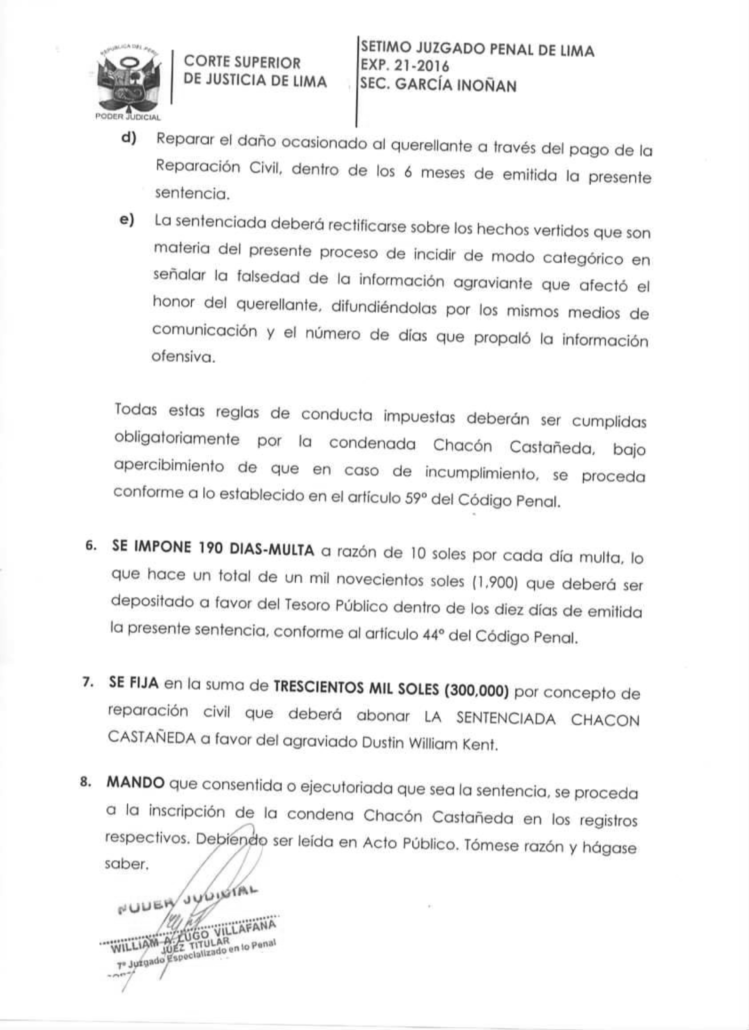 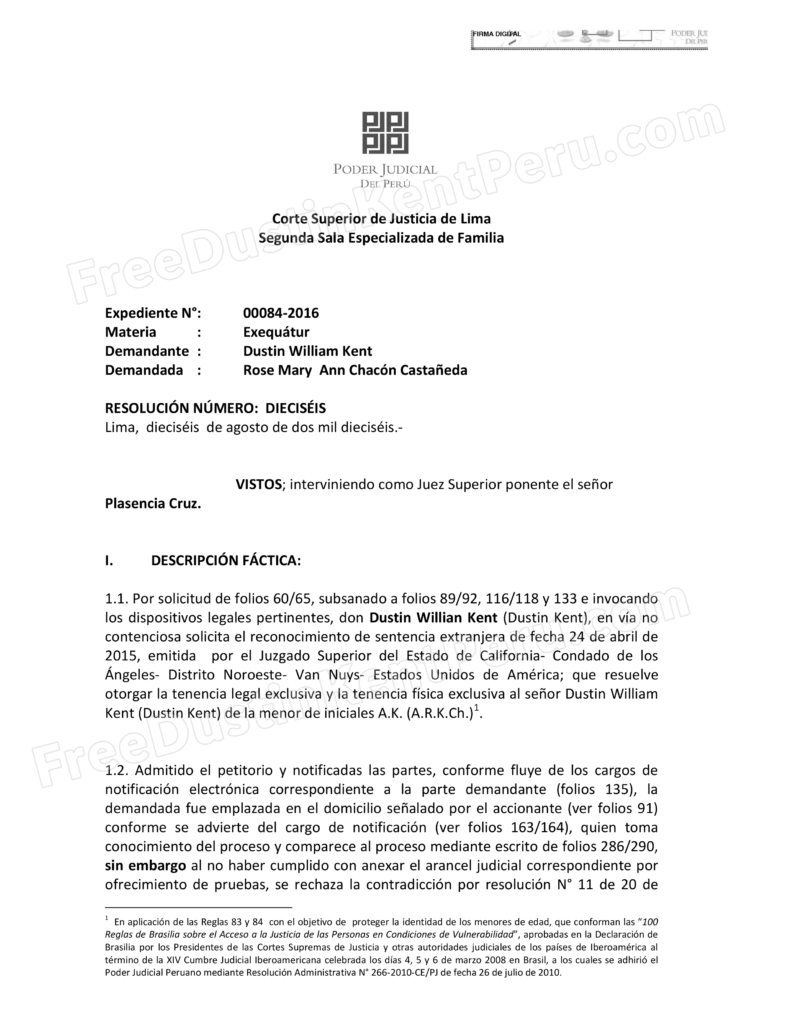 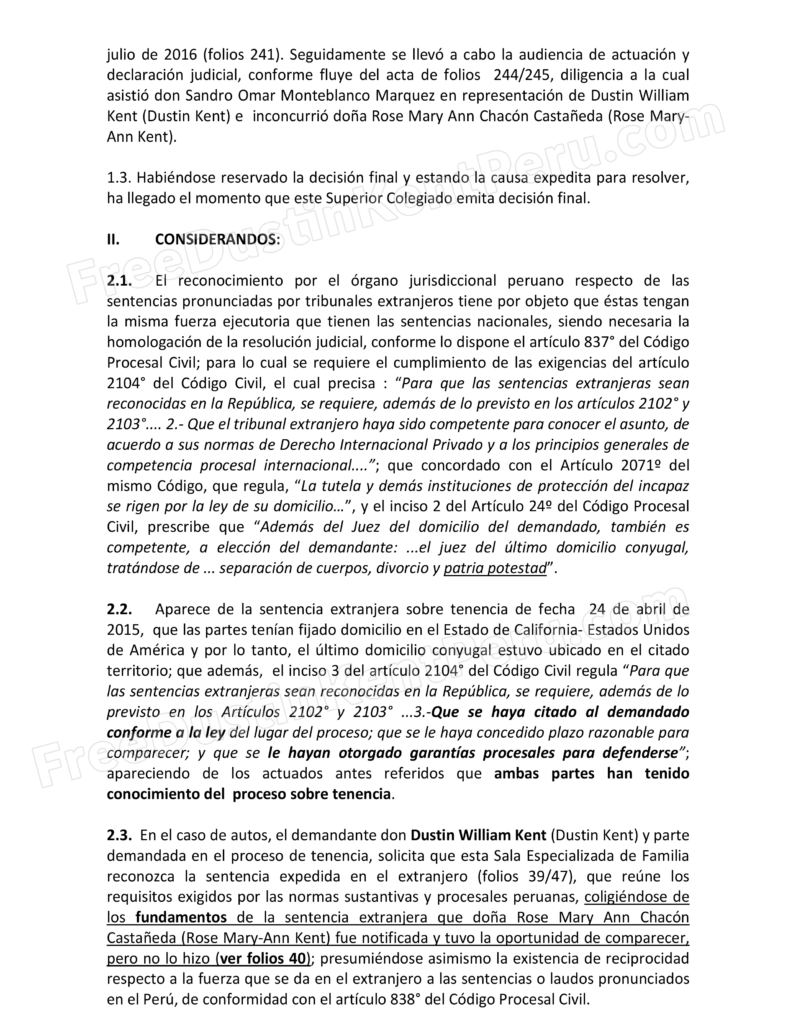 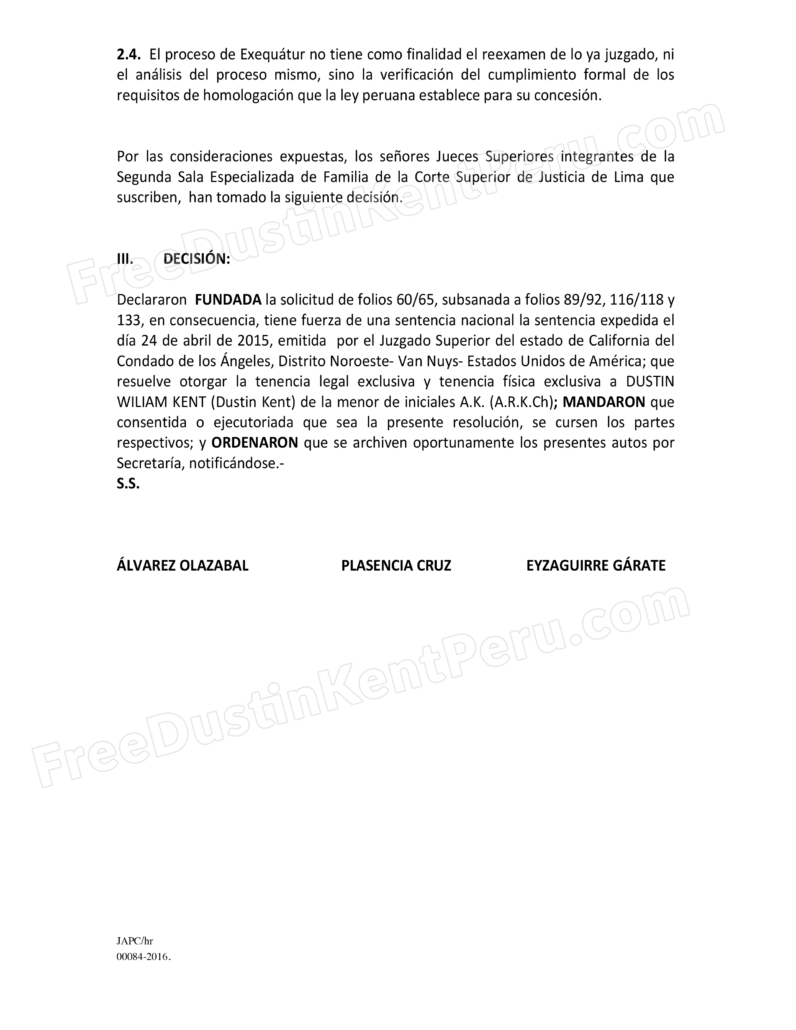 Dustin was granted custody of Adrianna this week! Dustin is one step closer to being reunited with his daughter. Peru recognized his U.S. Court Orders as legal and binding in Peru! ‪ There was a hearing in Lima for Dustin’s “Recognition of Foreign Sentence” where the judge ruled that Dustin’s custody orders from the Superior Court in California are valid in Peru. We are waiting to find out from the State Department exactly what that means in terms of Adrianna coming home to the USA.

A couple of months ago, Dustin filed a slander suit against Rose. She has lied to the police and the media about numerous things that have put him in prison, hurt his reputation and could impact his career as a nurse. She did this with clear understanding and knowledge that these were outright lies! Dustin has gone through the motions of proving this to a judge in Peru. They both went through the process of testifying before the judge and the motions are complete. The hearing is now concluded and we are waiting for the judge to make a ruling. This can take days or weeks in Peru but we will keep you updated. This is a criminal case in Peru that could put Rose in prison for up to 3 years.

Another open case that Dustin has against Rose is psychological abuse of him and Adrianna by abducting Adrianna and separating their father daughter bond. This is still in early stages and Dustin is waiting to testify in this case.

There are other cases still open and pending in Peru, the most important of all being the false kidnapping charge by Rose. A favorable outcome of the slander suit will benefit Dustin in the kidnapping case.

Thanks for all your prayers and support of Dustin. He is innocent and deserves to be with his daughter. We hope to see him free soon!